It was 2002. Prior to the Japan-Korea 2002 World Cup for the first time in this beloved country I expected to have a broadband connection to the Internet which would do away with paying ballooning monthly phone bill as the consequence of rather uncontrollable net connection on dial-up plan. Yes my ever growing appetite for information could no longer be sustained by a dial-up plan subscription. It was the phone bill that shook me down with nearly one million rupiahs monthly. That’s why I began to search high and low for a new connection plan that provided an unlimited basis yet with a more economical fee. The options were limited at that time but a friend of mine apprised me of the presence of a cable TV service which also provided an Internet connection on unlimited basis. Soon afterwards I began enjoying the unlimited basis which freed me from paying skyrocketing phone bills. I only had to pay Rp. 350.000,- monthly (10% VAT not included), it is way economical vis-à-vis the phone bill I had to monthly pay on the dial-up plan. Speed?? Well…. at the time I began to subscribe to it, speed did not much improve, it lumbered at a little bit over than 64 kbps! Or even in the peak hours of use, speed can drop to the level where you can appreciate your old 56 kbps dial-up modem. But I did not really care, I was absorbed with the fact that I had to pay less with more time of connection every month and it made me be in seventh heaven!

Unfortunately I had to subscribe to the pay-TV too to enjoy the cable connection. That’s because the cable TV operator did not offer Internet service and if you wanted to connect to the broadband connection you had to contact an Internet provider that became the business partner of the TV cable operator, as simple troublesome as that! But for the total enjoyment in surfing the Net, I was prepared to expend ‘more’ and quitting the subscription to my old pay-TV operator.

The clock ticked on, in 2004 the provider raised the fee to Rp. 500.000,- (10% VAT not included). In the previous year, I had to leave Jakarta for Bandung due to my job’s prerequisite. I did not quit the service because I still needed it in case I had to stay in Jakarta for a day or two in slack times or in holidays. Meanwhile in Bandung, I also enrolled in another TV-pay service as a subscriber (2006) and in another broadband Internet provider (2007). With the multiple subscriptions like this of course it brought out the financial burdens in me and somehow I had to find a way to cut down the budget.

In the late 2007, I was informed that the (Jakarta) TV cable operator had offered the integrated Internet service with more economical value because it operates on its own network unlike the third party provider which must offer the service with a higher fee due to the additional network lease fee. Initially (and oddly) I doubted to switch to the new provider as they tried to improve their service. Speed had quadrupled since 2002 when first I subscribed. And last but not least I did not have the heart to quit the weaker side ( I take the third party provider for the weaker side because in no way they can compete with the host or TV provider integrated Internet service on cable network).

But in the end of the day I had to make up my mind since I am not a well-to-do person, I am just another man in the street. After mulling it over for more than a year, soon after the last Eid-ul-Fitr holiday I decided to switch over to the TV cable operator’s Internet service, bidding the old Internet provider adieu. However despite undergoing the ups and downs with the service I would like to thank the old Internet provider for giving me the first experience of broadband Internet connection…..

My so-called new Internet broadband provider/TV cable operator in Jakarta: Kabelvision F*rst Media. I subscribed to FastNet 512 which only costs me Rp. 195.000,- (VAT not included).

How Much Rice Anyway? 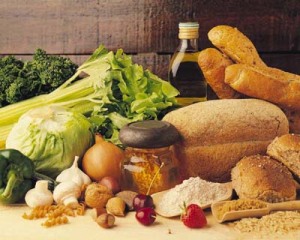 Saturday afternoon about five I just returned from a shopping spree with my family. I sank myself in a couch. I did not know what else to do. So to drive away the ennui I grabbed the TV remote and I switched the TV on. The first scene appeared on the screen was a talk show programme aired by Global TV. It seemed that someone had previously tuned in to the station. Yes, the programme is called “Asyiknya Bertani” (the engrossing farming). Actually it is not one of my fave programmes yet I was clueless why at that moment I could focus on the programme.

I do not know how the show kicked off but all of sudden I noted that the female presenter of the programme which is an Indonesian TV personality made a comparative slip-up, remarking (it approximates to): “Corn has more calorific value and less costly than rice”. Okay, let’s leave the economic facet out in that I am not too interested. Let’s focus on the calories produced by two objects. Can you see what is critically missing from the presenter’s remark above? Yes you are right, the units that should be applied to both objects are not there! How much corn is she talking about? a kilo of corn? Just a grain of corn? a cob (or an ear) of corn?? And how much rice is she talking about too? a grain of rice? a tablespoon of rice? a plate of rice? or is it possibly a kilo of rice? To make a comparison useful especially if we are talking about a quantitative comparison, interconvertible and well-defined units should be applied to all objects being compared. If we fail to do so the comparison will likely be futile, perplexing and misleading. Of course it is not just to compare the calorific values between a tablespoon of rice and an ear of corn. The rather fitted comparison might be between a plate of rice and an ear of corn but the most acceptable comparison is to use a mass or weight unit like kilogram, gram, pound, ounce and whatnot so the comparison can be analysed through a more fair basis.

The TV presenter is LK if I don’t mistake someone else for her. What rather surprised me is that she holds a degree in medicine. Considering a degree she holds she ought to make a better comparative remark than that she had. I would not be so taken aback if such remark came out of my domestic employees who did not pass grade school. But of course as an old cliché said: to err is human and slip-ups got nothing to do with a degree someone holds. I am sure I am prone to mistakes as well. I do not want to be something that borders on a cynic but this article rather reminds us to be very critical and analytical upon digesting a bit of information…..

After hearing out Kang Anggara‘s voluble address on ethical blogging in Pesta Blogger 2009, I decided to abbreviate the subject’s name. I realise that in the last paragraph of the post, it merely touches on subjective matters rather than the objective issue. So it is my mistake. It proves out that mistakes work on me too!

An Orangutan That Attacked A Security Guard On The Wit 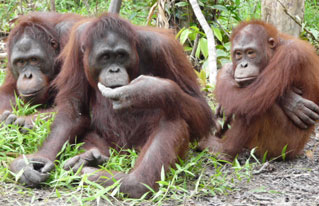 A Troop of orangutans on "The Orangutan Island"

The Orangutan Island show on The Animal Planet is one of my favourite shows which is aired every Friday Night. The episode aired on last Friday was “Chen-Chen’s Return” which told us about the return of an orangutan called Chen-Chen to the island from the rehab centre. Chen-Chen was rushed to the rehab centre because of the head injury he suffered. But the episode is not just about Chen-Chen’s return. Another story included in the episode was about a 10-year-old male orangutan called Hamlet who attacked and hurt a security guard (satpam).

Here how the story rolls. In the orangutan island which houses tens of rehabilitated orangutans security guards have to constantly watch the perimeter of the island to thwart poachers and illegal hunters from hunting down the orangutans and from damaging their surroundings. The guards usually make the patrols on the waterway. To fortify their presence in the island, the guards set up a few posts but the posts are relatively distant from the platforms where the orangutans usually gather to socialise amongst themselves. The “safe” distance between the posts and the platform seems necessary so the orangutans would not feel disturbed with the presence of the guards. And that’s why the posts are not frequented by those of our red hairy distant relatives!

But it happened one day when a 10-year-old male orangutan called Hamlet came too close to a post where there was only a lone guard therein. Orangutans are normally very gentle. They are even way gentler than their distant African relatives, the chimps. But of course there has always been an anomaly in a population and these orangutans are  no exception. In the wild, adult male orangutans live solitary and they are exceptionally territorial. It means that they would defend their territories if they saw other males intrude into theirs. Usually orangutans do not attack people but in a rare case an orangutan might regard an adult human male as an unwanted element that must be forced off. And the case is true when Hamlet saw a security guard stood alone inside the security post.

The security guard was wounded at various parts on his body. The worst one is at his foot. If the infection ran too deep the worst scenario is that he might lose his foot for good. But fortunately the guard’s foot was healing and he did not have to kiss his foot au revoir. The site manager of Nyaru Menteng Orangutan Rehabilitation Centre, The Danish Lone Dröscher-Nielsen had decided on what to do with Hamlet. If the same accident happened again the fate would be clear Hamlet has to stay ‘behind bars’.

I am still astonished with the strategy used by the orangutan to beat the security guard. Sinking the guard’s boat before attacking him. That’s a very complex mind and it is exceptionally intelligent. Considering the wit shown by the orangutan, do you think that we share the same genetic traits with them??